Would you believe it!  I wrote the first part of this post on weather in Roseville CA (dictated actually) while walking through a delightful West Roseville neighborhood delivering community updates to my neighbors. It's the middle of winter, and while it was a wee bit chilly (in the 50s) at 4:30 pm, I was happy not to be walking in snow. I have two sets of grandkids who live in snow country and enjoy it. But I have to admit, I'm loving our winter weather overall and especially looking forward to sunshine and maybe temps in the 70s very soon! In fact, it is supposed to be a lovely 69 today! 🙂

Now, I’m not going to tell you our Roseville weather is perfect. We get rain! (Not as much as we need but that's a whole other post…). We get fog (but not NEARLY as much as Sacramento). We get HOT days (I do LOVE air conditioning and our wonderful DELTA BREEZES). But compared to many states, it’s a definite delight.

As Sperling's Best Places puts it,

Alternatively, check out these recent weather headlines from around the U.S.:

YIKES! Happily – NONE of those headlines reflect our weather in Roseville CA 95747 OR 95678 OR 95661 for 2018 or even 2017. It also doesn't reflect the weather of our “next door neighbor” of Sacramento CA. Hoorays all around. I guess that's why California is enjoying the privilege of being one of the top states for retirement. AND why Sperling rates it:

Sperling Best Places ranks Roseville CA
83 out of 100, where a higher score indicates a more comfortable year-around climate. The US average for the comfort index is only 54

In fact, here's a video of photos taken in and around Sun City Roseville to give you a flavor of our winter weather joys. 🙂

As you may have heard, we did experience one bit of weather that caused headlines for several years – too little rain. Happily, last year's rainfall put an end to the drought for the time being. This year is still too early to call, though there are some weather watchers who are concerned, while others are saying, there is plenty of time for more rain. 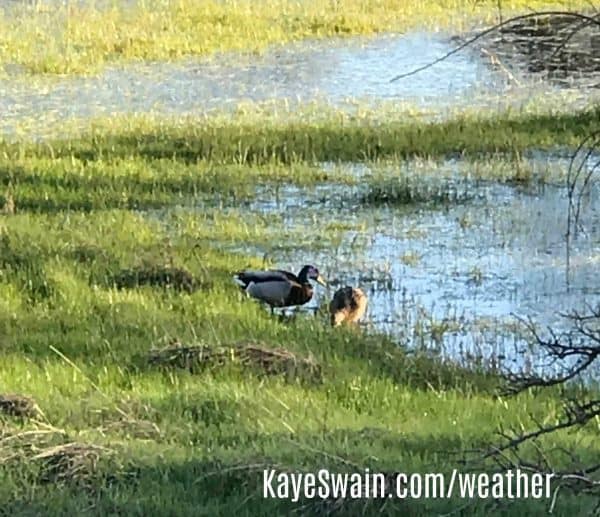 And check out all the lovely water we are still enjoying from the last rains. The ducks, geese, and egrets are enjoying these ponds thoroughly!

One big positive to the drought was that it led to some really sharp-looking front and back yards that use much less water. They weren't trend-setters, mind you. Sun City Roseville has led the way in drought-friendly, low maintenance gorgeous yards for over two decades and they still look GREAT! It's nice to see more neighbors joining in that particular garden trend!

Curious about Roseville Calif. weather in winter?  Here's what my old winter widget was showing for January 31, 2018:

Check out these facts and figures to show off our Roseville CA weather averages in winter:

According to Weather Spark, “The average Weather in Roseville California…the winters are cold, wet, and partly cloudy. Over the course of the year, the temperature typically varies from 39°F to 96°F and is rarely below 32°F or above 104°F.

Those temps (in the last paragraph) would make snow pretty unlikely here in Roseville, don't you think? In fact, according to a National Weather Service 2010 report for the Climate of Sacramento, it has only snowed a very few times in the Sacramento area.

So I had to chuckle at the Intellicast.com report of the average temperatures, especially for the months of December, January, February, and March. Can you guess why?

If you guessed the “average snow” of .1″ for January, that would be it. Perhaps they are factoring in the occasional frost we get? 🙂

And check out this cool Youtube video from December 2022 – listing even MORE snow dates than I've been able to find (turns out a lot of these were such little snow, they didn't make the “record” but they DID happen. 😀

Shhhh. Don't tell the weather peep, but we do get snow every year at Christmas. I have proof. Watch!

Granted, it was ONLY in downtown Roseville and ONLY for the Christmas holiday fun. Not to mention, it was only faux snow! Personally, that's my fave kind of snow. Right up there with snow globes and snowy scenes on Facebook. How about you? 🙂

You can find the weather forecast in a wide variety of spots in the Roseville Sacramento area.

All the following stations are Sacramento stations but, of course, they cover the entire Sacramento Valley area including the local weather forecasts for Roseville CA.

I'm guessing most local radio stations do cover the weather in our area. I personally enjoy:

Local Weather Forecast on the Internet

We have our own local weather Roseville forecast options on the internet starting with Roseville Weather Geek – KCAROSEV118. We also used to have Herb's in Roseville, a West Roseville neighbor's personal weather station near to me at one of the great 55+ active senior living home communities in West Roseville – The Club at Westpark, however he has since moved out of state. 😉

And, as I mentioned above, you can always check the front page here at KayeSwain.com for the weather Roseville is enjoying and expects to enjoy on my right side column (or below the posts if you're on mobile or ipad) :)! 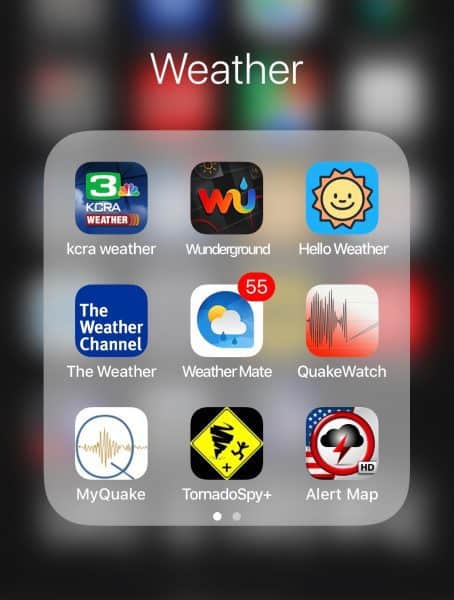 True confession time. This is where I get most of my Roseville weather updates. I currently have 4 weather apps not counting the IOS one that I don't personally care for. I'm test driving them and expect to end up with one or two. That doesn't count the tornado apps for when I visit relatives in tornado area, the earthquake apps I use when I hear reports of earthquakes on the coast, etc. (Yes, I'm a weather and news geek – I admit it! 🙂 ). Here are some I love in order of useage:

You may have noticed that I don't have a hurricane app. If I were ever to move to Florida, as many retirees do, I would definitely get one or more of those. I'm very grateful we don't have to deal with hurricanes here in Roseville CA. Another PLUS for all of us – including those retiring in Roseville!

Well, as you have read, overall we do have delightful winter weather Roseville CA! It's so nice living where we have four seasons. You can enjoy the ever-changing variety, in moderation, compared to most other places in the United States. Couple that with all the other grand things Roseville has to offer and you can see why it's been recognized as a great place for all ages including to raise families as well as a great place to retire in!

PS Love what you've read about the weather Roseville, CA 95747 enjoys and thinking of moving to Roseville CA? We'd love to help you! Just give us a call at 916-768-0127 or email us at KayeSwainRE@gmail.com.  🙂 And be sure to check out the latest listings below for Roseville California 95747, including some brand new homes, great aging in place options at our various 55+ golf and other retirement home communities, and more: